skip to main | skip to sidebar

(Someone told me something recently about the ownership of Green & Black's? something not good?)
Posted by cp at 11:02 PM 1 comment:

Email ThisBlogThis!Share to TwitterShare to FacebookShare to Pinterest
Labels: chocolate 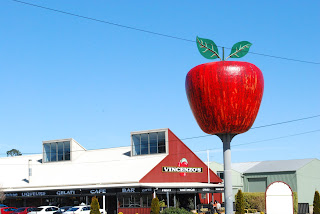 Stanthorpe is home to the Big Apple. 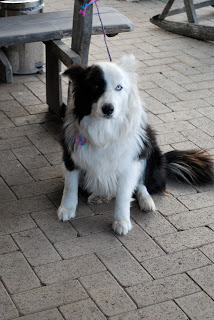 And dogs and cats, resident at wineries, cidery, cheese place, Jamworks, a lavender farm, a Bramble Patch, and such. 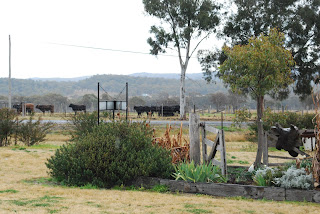 Most of these photos speak for themselves, I think, and maybe tell the story as well, of my weekend there a few weeks ago. 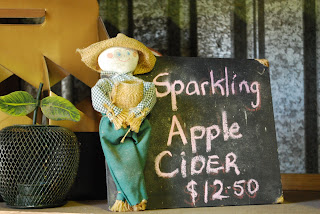 Sutton's cidery was the first place we went on a bright Saturday morning. Plenty of juices, apple brandy, as well as a dry and a semi sweet cider. I bought a bottle of semi sweet. 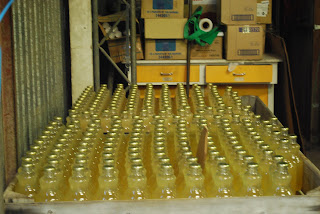 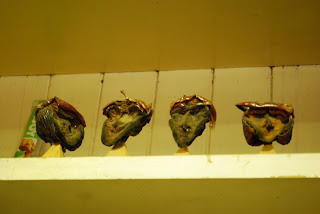 Those are real apples.
!! 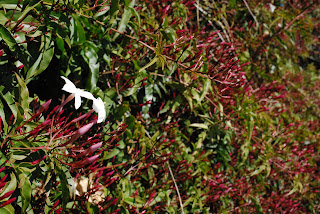 My favourite thing I bought in the whole weekend might have been the wooden board I got at the cheese place. Actually I wasn't blown away by the cheeses generally, and thought them a bit on the steep side, but that's probably just me. I did quite like cheese no. 2, Pepato, and bought a chunk of that. 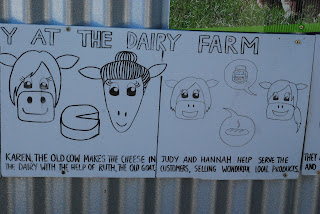 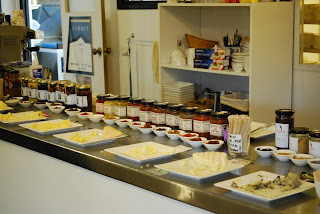 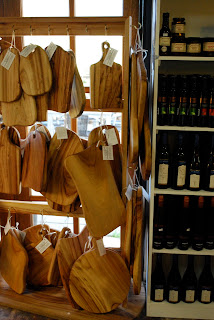 After cheesing, we went to this liqueurs place, Castle Glen, which had about a billion kinds of liqueurs. To be honest I was a bit put off by the outside of the place. Look at it. 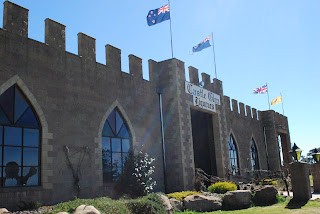 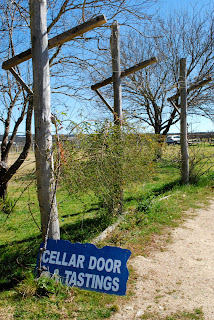 Summit wines (they had a restaurant and a cat. I saw neither) 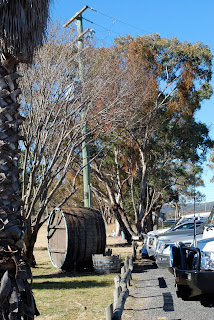 Summit also have a delicious merlot and an insane chocolate port 'Cocovino' that tastes incredibly like Cottee's chocolate topping (too much for my taste). 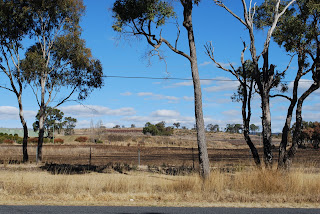 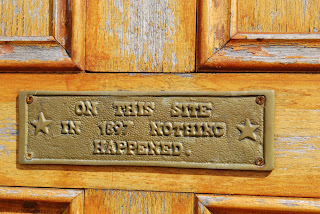 I really do want to recommend, though, that you go to Felsberg. For the food and the view, even if you're not into wine. The haloumi was beautiful. The burger looked great, and the pizza did too.. and I sTILL want that cake. (One of our party was still full from breakfast, and didn't want to spend too much money, so decided on cake for lunch. Worked out well for her!) 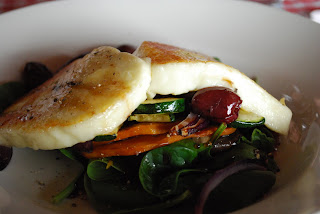 The wine is great though. We got 6 bottles between a few of us, and were given a free bonus bottle. We chose the Gewürtztraminer because it was wonderful :) and drank it with lunch. 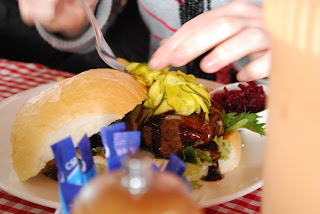 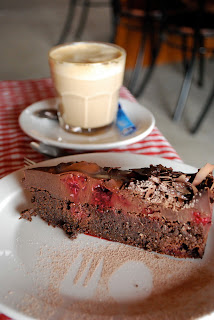 LOOK at that Ganache. Yes, with a capital G.
We thought it was pretty cute that when Miss S picked up her fork and spoon there was a stencilled... space. 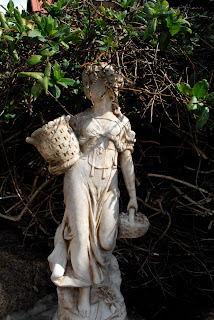 In the garden at Felsberg 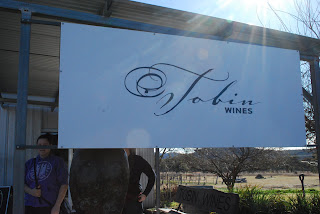 At Tobin you learn a lot from a passionate winemaker. I think you appreciate the wine all the more for it. It's a bit of a boutique place, where the grapes are handpicked and the merlot is intense. The wines are named after grandchildren :) I bought a bottle of the Luella Plum Cabernet for cellaring (or cupboarding). 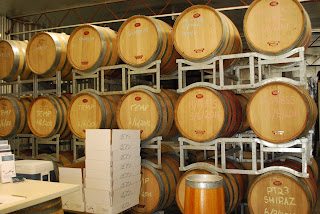 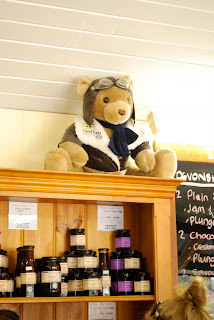 The Jamworks bear. (Jamworks: relishes, chutneys, jams, curds everywhere. They didn't have their Apple Butter out for tasting but I bought some anyway on recommendation from a veteran Stanthorpe foodie tourist.) 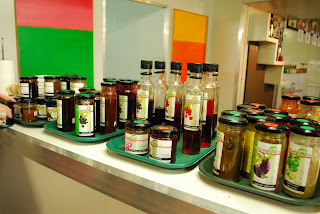 
In the rain. It was very beautiful, especially after what I felt had been a hectic weekend really. Trying to get to everywhere before they closed. 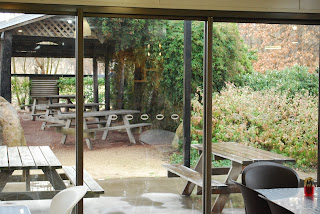 Below - Symphony Hill. I think they have wines there, too. Their sparkling chardonnay would certainly suggest so. They also had a great gewürztraminer. 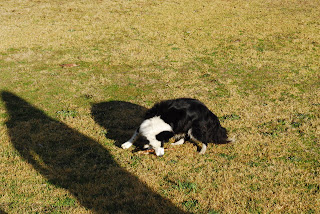 Not sure I even got photos of the olive place (with the fudge place). By the way, this dog is not the dog from the top photo - the top photo's one was at the lavender farm, the bottom's is from Symphony Hill wines. 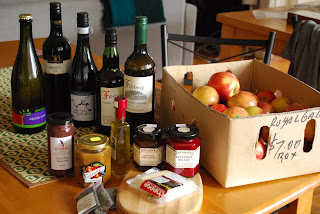 That box in the pic is half full compared to when I brought it home, by the way.

P.S. Just saw a post from Deb on Smitten Kitchen about fruit butters - hers being peach butter - check it out, especially if you haven't met a fruit 'butter' before. I hadn't. (It has no butter, egg, or any opaque thing in it. More like a jam.) This peach butter looks rather good.
The thing about apple butter not having butter IN it is that you can have butter WITH it. Or, as I have yet to do, put it on a crepe with some icecream and fold the thing up. Mmm, would not mind some of that right now.
Posted by cp at 9:57 AM 3 comments:

I've been thinking more about a few things, including propaganda of various kinds, particularly since the other day - we were standing at the bus stop and I made a joke about how a particularly plump bird nearby (not sure what kind it was) looked good to eat. Then I remembered that one of the friends I was with was vegan, and said sorry.

And he laughed, and said why should I be sorry, and something about being sorry for me because I was going to get bowel cancer from having rotting meat sitting in my bowel for 6 days at a time; a remark that sounded extremely like something out of Skinny Bitch. I was - maybe unreasonably - gobsmacked. I gave a shocked laugh and said I get plenty of fibre, water and exercise, thankyou very much, and I can't believe you just said that.

That was the best I could do at the time. But he seemed so AGGRESSIVE in that moment, and it actually really freaked me out.

This got me thinking about some value things. On my friend's blog, he has a recent post about some things that bother him about other vegans, and some omnivores' attitudes towards veganism. In another post, he also mentions not wanting to kill and maltreat animals 'just so I can eat'.
I want to make it clear that I have no problem with veganism - there are many things about it that I admire.  And I hate the idea of 'factory farming'. But I take issue with the implication that people's eating is not important. I believe that whatever kind of diet you eat, and lifestyle you lead, somewhere high on the list of priorities should be health. Your own as well as the planet's and all the creatures on it. (And I mean HEALTH, not being skinny, which is popularly marketed as health.) And of course part of health is wellbeing, which doesn't come about by obsessing to the point of getting stressed and ranting at people.

Sometimes considering the ethics of eating, it occurs to me and other thinkers/writers that eating meat/animal products - and also eating plants - has shaped our evolution in some ways, such as the use vs. disuse of our appendix, the length of our intestines, and as the meat ads on TV say, something or other about the brain. But maybe if we are designed to eat meat, we need the nutrients we get from it, like B12 and heme iron? Of course it seems there are other ways of getting most things. For ages now, though, the dairy issue has fascinated me. Especially as more meat and dairy is consumed in countries where it hasn't previously been such a part of the culture.

And I am somewhat lactose intolerant, which has also contributed to investigations about this. (Ironic on a blog named as this is, I know.)

Anyway, I've read dairy propaganda and vegan propaganda. Everyone wants you to buy what they're selling. And it may be the academic in me, but when I see a reference from a journal called 'AnimaLife' or similar, it seems a little bit dubious. As is a reference from a meat or dairy association. And nearly all of them are, because if you've got a vested interest, you're going to do the research, aren't you, but you're also going to talk about the evidence that makes your point look good and the other irrelevant.

The cry goes round my mind, again and again, 'Are there no objective investigations into this?'

I have found a couple of pieces with a pretty neutral tone, that also make it possible to feel you understand the principle of the thing, because attempting to Wiki calcium just makes me wish I'd kept doing chemistry past year 11. Anyway, thank goodness for LiveStrong. Have a look. And also the tone of a level-headed Singaporean vegan, whose thoughts on the issue (of calcium and bones) make sense and are beautifully written and, actually, who has just posted today on why some vegans are so angry, which I'm not writing on today, but have been thinking about.

Also, can anyone else put the science of this calcium-leaching issue into a clear light? Or got a reference that explains it slowly and clearly?

P.S. My attitude, from my mum, remains 'everything in moderation.'

P.P.S Phrased differently, from my dad: 'The best diet is a good vegetarian diet. Plus meat.'
Posted by cp at 4:26 PM No comments:

winter comes to an end again

Not that I have anything seasonal to write about really.

Except I LOVE navel oranges in season.

This post, by the way, has no larger coherence. (Local coherence it has got. I know about this because of a doubly interesting talk I attended last year in a Research Methods class. But that is a tale for another time and place.)

Aaaand here is a goat. 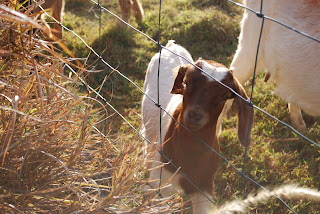 My mum and dad came up to Brisbane, and we went to Childers for a visit. The dirt is red and amazing. It grows anything. (below see flowering.. peas?) 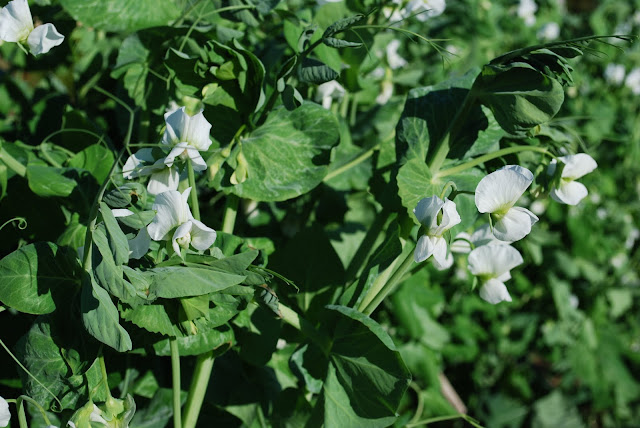 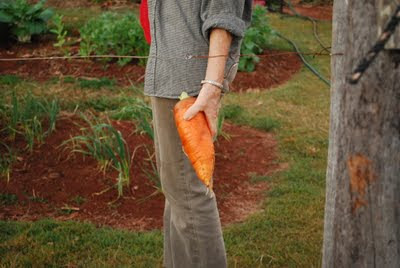 They've got macadamias, bananas, avocadoes, pineapples, pawpaws, mangoes, vegetables all over the place, and beautiful oranges and mandarins and enormous lemons. But check out the carrot. We took another photo of one next to my head - think that's on Mum's camera - and it was quite a thing to behold.

In other news, I am reading P.G. Wodehouse, and not just because Stephen Fry has also read him. I recommend! It has also got me almost interested in cricket. (Ha, that just put off any friend of mine who is reading. I mean it though... ) It's great writing and thoroughly enjoyable. Not that I know what 'good writing' is. But that is far too philosophical a topic for this blog, because you and I aren't at a table with a cup of tea and something comforting that I would need to stave off the headache that this topic would bring on. (I stand by my belief that Harry Potter is well written. The end.)

In other other news, I finally tried Campos coffee. It's so attractively presented that I just knew it would be good coffee. Error. Did not particularly enjoy. I'd rather have something I made myself, with beans either from Merlo, Grinders, Oxfam or Frisky Goat. (Not Lavazza! Does not combine well with soy milk.)

Umm.... yep.  One of my friends went vegan for Lent and is now vegan. I went vegetarian for a few days because I was freaked out by both the amount of factory farmed meat in the house and the amount of time it spent out of the fridge, before spending twice as long in the fridge, before maybe being frozen for a week or several, then left out of the fridge for a day again to thaw, etc. before being fed to people. But the thing is, partly, I myself am by choice omnivorous (but I don't want meat every day, and generally not more than once a day), and more than that, I don't want to cook separate meals to the rest of the house. It just seems way antisocial. So I am back to sometimes vegetarian. And I buy free range eggs and don't use them all the time. And sometimes I cook vegetarian for the house. And it is grawesome.

Oh dear. This post has been a bit "Dear diary". Hope it's entertained you for a minute, anyway. I've had fun. 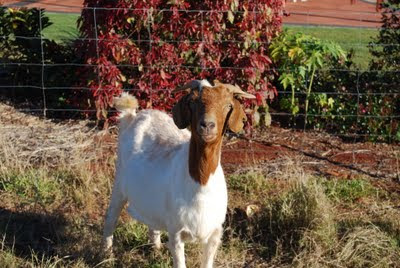